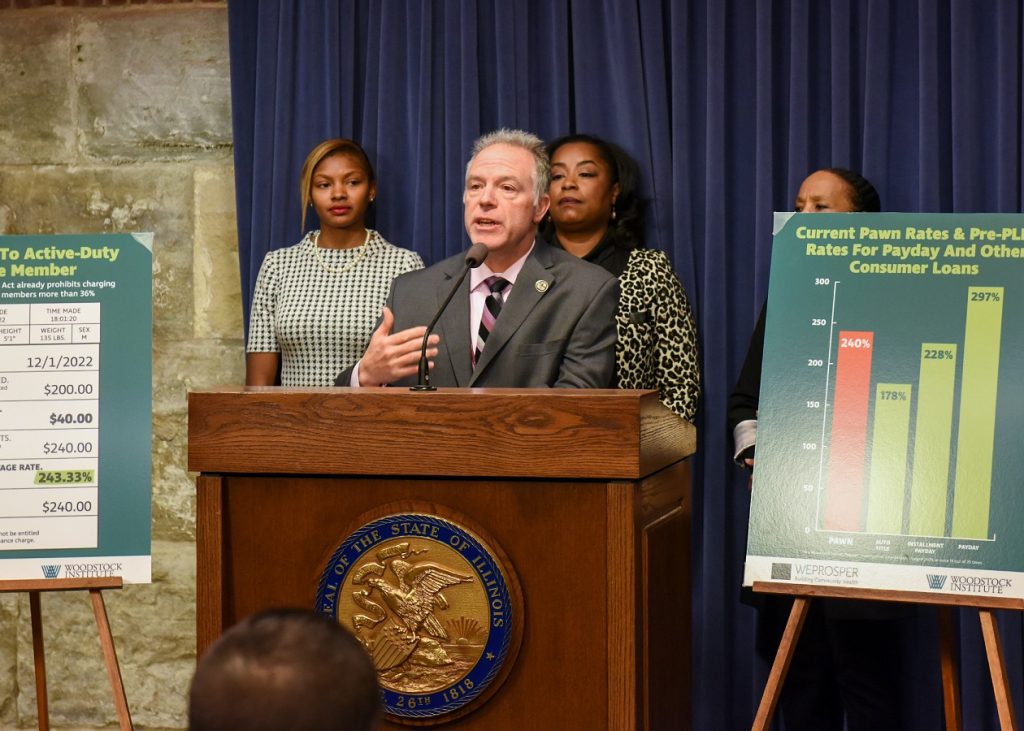 State Senator Craig Wilcox (R-McHenry) stood with a bipartisan group of policymakers at the State Capitol on Wednesday to launch new legislation that would close a dangerous loophole in predatory loan practices by pawnbrokers.

In 2021, the Legislature adopted the Predatory Loan Prevention Act (PLPA, Senate Bill 1792 in the 101st General Assembly), a measure that capped the APR that could be charged on consumer “payday loan” type loans at 36%. After the bill was signed into law, pawnbrokers took the issue to a Sangamon County judge, and successfully received an injunction that exempted them from the 36% cap. Through Senate Bill 4241, legislators are attempting to force pawnbrokers to adhere to the same APR cap as other “quick cash” loan agencies.

“Far too many Illinoisans fall victim to this kind of predatory loans, and sadly there are bad actors out there that are all too willing to take advantage of unsuspecting and uneducated consumers,” said Sen. Wilcox. “The PLPA has shown great success in its first year and a half of existence, and now we must close this loophole with pawnbrokers.”

According to Wilcox, prior to the adoption of the PLPA, the average APR on a payday loan was just under 300%, with the average APR on a title loan coming in at 179%. Whereas federal law already had protections in place that capped the APR for active-duty military at 36%, there was no such provision for veterans, or members of the general public. The PLPA extended that 36% APR to all consumers.

“As a veteran and former commander in the U.S. Air Force, I saw many examples of predatory loan providers taking advantage of military personnel with exorbitant interest rates on small-dollar loans,” Sen. Wilcox said. “It was disheartening to learn that pawnbrokers found a way to continue charging their outrageous interest rates, but now we have an opportunity to realize the full legislative intent behind the PLPA. We must pass SB 4241 quickly and immediately hold pawnbrokers to the same APR limit as other loan providers.”

Wilcox continued, “However, the issue is bigger than simply legislating a ‘fix.’ We need to do a better job of educating consumers on the dangers of these types of loans, and stressing the importance of overall money management.”

SB 4241 awaits assignment to a substantive committee for a hearing.