Statement on PRB Chair’s Failure to Appear before Audit Commission 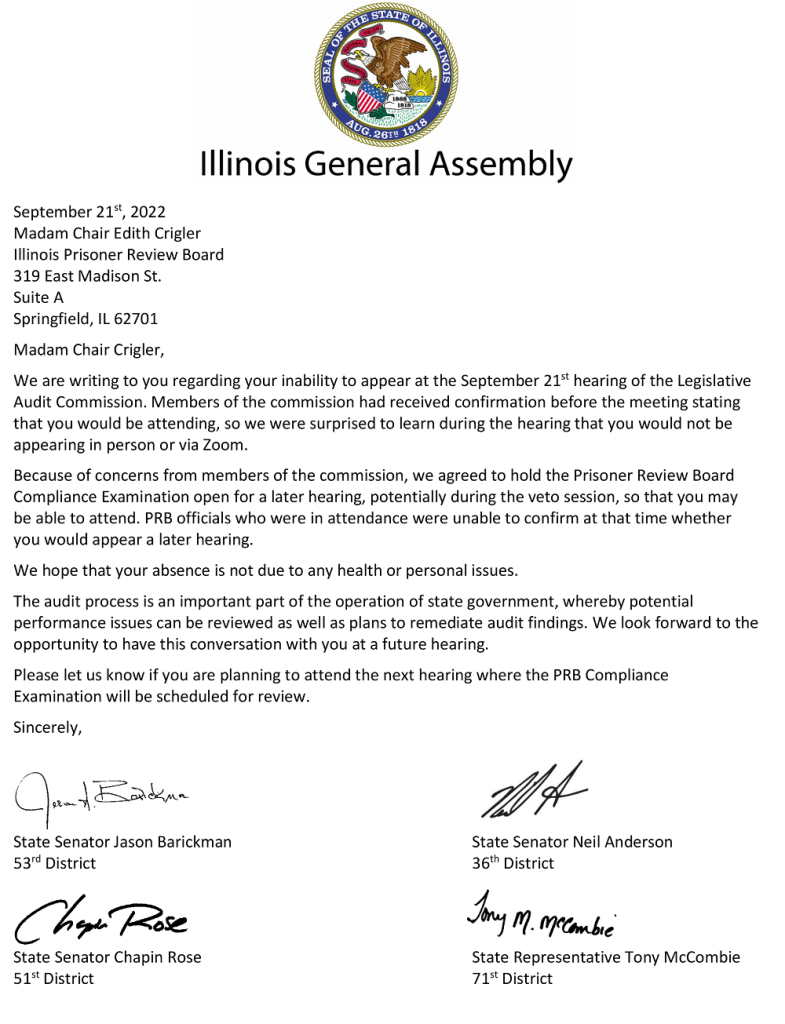 The Illinois Legislative Audit Commission (LAC) was scheduled to review the most recent compliance audit for the Illinois Prisoner Review Board (PRB). Breaking with standard procedures for audit hearings, PRB Chair Edith Crigler did not appear at the committee, despite committing to attend in a prior communication, and gave no advance notice of her inability to attend in person or via Zoom. After a brief meeting of LAC members, the commission decided to hold the PRB audit open for a later hearing, potentially during the veto session, so that the Chair may attend. PRB officials in attendance would not confirm whether or not the Chair would attend a later hearing.

“Given recent issues and controversies surrounding the Prisoner Review Board in recent years, we believe it is especially important for the Chair to take part in the bipartisan process of reviewing their compliance examination. The audit process is a vital aspect of state government, where lawmakers are able to discuss audit findings and to question agency officials about how they are working to fix ongoing issues.

“In terms of the audit itself, it is particularly distressing that there were multiple repeated audit findings, including two that have been issues since 2018, and another dating back to 2016. The most troublesome is the continued finding of ‘Noncompliance with the Illinois Crime Reduction Act of 2009’. In addition, there are serious concerns about the Governor’s failure to effectively fill vacancies on the board itself.

“Considering the importance of the audit itself, as well as the ability to appear in person or via Zoom, it is extremely disturbing that Chair Crigler did not appear at the hearing and gave no prior notice of her intended absence. Attending these hearings is not always a fun process for agency officials, but it is a vitally important aspect of their positions. We are hopeful that Chair Crigler will agree to fulfill this duty at the next hearing.”